I always felt great sympathy for Sara Keays. When a married man, and one who is holding high office plays away for twelve years with the same woman, it is reasonable to assume that his wife is not fulfilling his basic needs. Such a risk would only be worth if a great attachment had been formed, dare I say it something like love and even trust of a kind. Basically such women are servicing a marriage for the convenience of the partners. who were “having their cake” etc. But there is no such thing as a free dinner. Sara Keays conceived a child with Cecil Parkinson the man she loved and at first it seemed all the world might love a lover. Promises were made which on reflection were honest a true, these were shared, the child would be loved and take his or her place in the tangled world. But wait! Political careers were at stake what had seemed inevitable did not happen . We had the gospel according to Margaret Thatcher, I suspect this was not her finest hour. What a trail of tragedy resonates down the years. How ironic that a good and talented politician should be remembered for this . Hindsight is a fine thing, Cecil was a nice man and a loyal friend but flawed. There will be a very grand memorial service and fine words will be spoken, tears will be shed large black hats will be worn, but who will spare a thought for Sara Keays and her daughter . She has coped with a terrible tragedy alone, a child who is damaged, with no father to fight for her ,ill-starred lovers indeed. But little Flora was not a child of our times but one of an era steeped in hypocrisy. Twenty years later I think things would have gone very differently, Sarah Keays was brave to think she could buck the system, she underestimated the vulnerability of a man who has achieved high office from humble beginnings and will in the end sacrifice a promise for the status quo, at any cost?

This afternoon I finished the epilogue for my book Summers Grace, The Sainted one read it aloud to the recumbent males in his book at bedtime voice and handed it back with one word said in a low voice, “ yes” I don’t know he meant because I was blinded by tears , of course I thought it was superb but who knows what everyone else will think? That will be revealed in due course. Meanwhile it was a bad time to expect a reaction because it was nearing feeding time at the zoo. It is all about stomachs, I wonder if the awful adaptation of War and Peace where a lot of people have empty stomachs will include these important details from the “authentic” on TV again tomorrow but then we are told they have “ removed the boring bits and “ sexed” it up with some cheesy incest”. This I read in the Spectator, I really do not know what has come over them. Is there bit of nepotism going on there? They already quoted the remark that it was like up market Downton Abbey last week I don’t know where Tolstoy is buried but he would not be happy about this…… how about new version of the bible with all the boring bits removed ????? eg the feeding of the five thousand the loaves a fishes etc, let’s get a quote for the weird Archbishop Welby on this we should be making it into a sitcom set in Croydon, or better still Sloane Square the BBC would love that.

The writers elbow is still volcanic with a hole in it, I complained to my doctor that I already had a number of orifices and this was one too many. He looked at me rather strangely. Give me the ballet any day everyone keeps their mouths shut as they did in the beautiful production of Le Corsaire at the Coliseum last night, except for the usual water gluggers of course, why is this?

Shock horror someone wake me from the nightmare. The Spectator hitherto thought by “moi” to be the seat of  “ all there is to know and all that we need to know” (apologies to Keats of course ) has just printed a review of Andrew Davies garish, and moronic “ adaptation” aka massacre of War and Peace, the greatest literary masterpiece of all time, and the world’s best-selling book (apart from the Bible); in which James Dalinpole describes the awful rendition as up market Downton Abbey. He alludes to the content of the story presumably. War and Peace gives us a sweeping, brilliantly nuanced narrative of the world in turmoil prior to the awful events in Russia which eventually led up to the revolution , the idiocy of Napoleon, and a class divide which changed the map of Europe. I bet Lord Fellowes will be shocked by this, he would never presume to be on the same world stage as the supreme literary genius Tolstoy. Most people whom I regard as credible or literate will always remember when they first read the great book. The metaphors we see replayed in our humble lives, and political catastrophe on a daily basis are all in the page. Take the principle character Pierre in which Tolstoy shows us all the promise of a man awaiting his epiphany, Dalimore gives us a idiot with bad hair…… It is probably true that Hitler did not read it, one of his most awful endeavours would have then been avoided if he had he would have known, for example, that the early migration of birds was an indication of the brutal Russian Winter which comes overnight and takes no prisoners We will watch it anyway of course.

I still have writers elbow which looks like a scrotum, one of my cruel unsympathetic family laughed and chanted “ grandma’s only got one ball.” A bit tricky that , in the present climate of trans gender. Bollocks to that those pretend women will never know the joys of periods or birth pains or mastitis… well dare I say it that is all behind me…. whoops!!!! 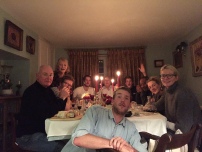 You know there are boundaries, even sweet tempered people like moi who are greatly loved for their reticence and constancy?/// have a tipping point. Such a situation occurred recently when a very noisy woman began pawing her male neighbours at dinner. Neither recipient was in my opinion man enough to discourage this, which I know full well to be a contradiction in terms. However when one of the jewelled age spotted hands went under the table cloth. An approach was made and in terms of utmost decorum the offender was asked to leave just a little bit of one of the gentlemen for desert, as the rest had been devoured for the starter and the main. This story still has legs believe me it does

It’s not that the event merited a “bitch fight” really It’s just very disrespectful like someone eating off your plate even when you might have decided you have had enough and don’t like yesterdays mashed potato. Well you all know what I mean. Later that evening a woman who looked as if she would fall to pieces if she smiled, which of course she could not because her face was pumped like an over ripe steak tomato lent towards me and told me I had quite a pretty face, but it needed a lot of work on it. “ WORK” I screamed you don’t know what the word means try the ten loads of washing dragged up five flights of stairs or disinfecting five lavatories !!!!!” now that was code for really posh person who owns five “toilets” and all those stairs, yes I do and I have worked hard for them and they are all mine.

I have a terrible turn of phrase when provoked and by and large it is seldom worth the effort, and off course I find now everyone offers me a seat on the bus even people who look older than me . I always accept it would be churlish not to. Actually I find people absolutely charming .